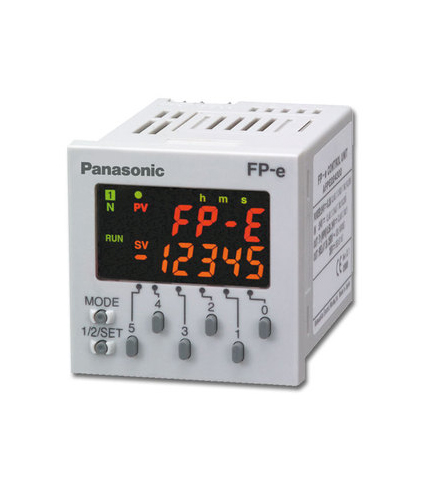 Timer/Counter/Temperature set values can be changed using front operation switches.
The switches can also be used as input switches (X30 to X3F), which save the need for installing external switches.

Panel mountable, little space is taken up on the control panel. The size is only 48 ´48 ´ 70 mm (behind faceplate).

The FP-e has same functionality as FP0 such as pulse output and high-speed counter functions.
Other than a tool port, a unit is equipped with COM. port (RS232C/RS485) for communication.

The front panel of the FP-e is water-proof IP66.

Equipped with RS485 and RS232C interfaces

With RS232C, communication with up to two ports is possible. (RS232C type).

Can even handle temperature control

Two-point K-type thermocouple (-30 to 300°C) connection is possible. (equipped with thermocouple input)
Can be used in place of a temperature controller or used to control them.

Pulse output function
The unit comes equipped with 2 channels for pulse output of up to 10 kHz pulses. Since these two channels can be separately controlled, the FP-e is also suitable for 2-axis independent positioning.

An FP-e screen display program is generated by simply inputting values in the wizard screen.