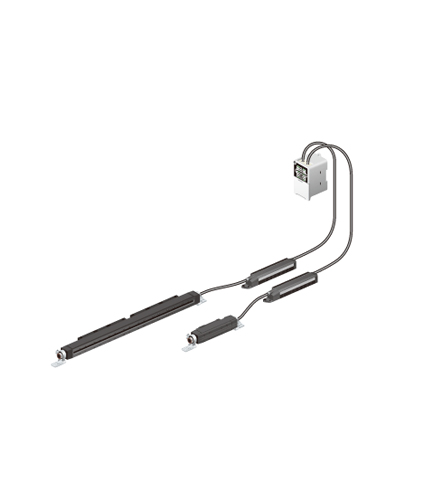 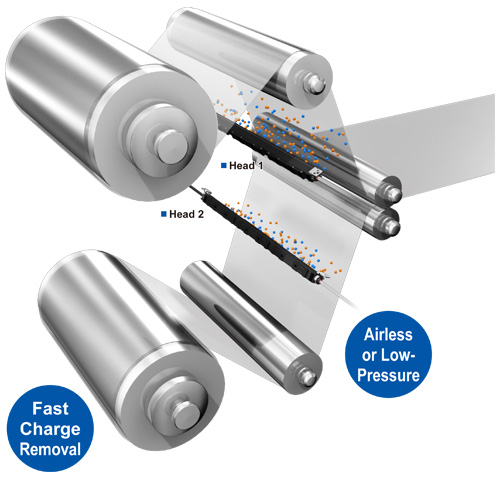 By applying a compressed air source, the ion volume increases providing an improved tact time for substrate ionization. This makes the ER-X suitable for applications such as electronic paper and thin film solar cells, where charge removal time is directly linked to productivity.

Resolves target movement issues in the presence of compressed air.

The ER-X series works extremely well for charge removal applications.
Precision substrates like laminated film and lead frames, as an example, may become unseated or shifted due to the presence of a compressed air source. The absence of compressed air during ionization facilitates smooth operation while efficiently removing surface charges.

The ER-X series can effectively remove surface charges with an air pressure of less than 0.05 MPa.
With the advantage of minimal dust dispersion, it is suitable for charge removal in semiconductor, FPD (mobile panel), and other applications that require high degree of cleanliness. The presence of air also helps prevent adhesion of dust to the discharge needles, requiring less cleaning than in the airless charge removal mode. 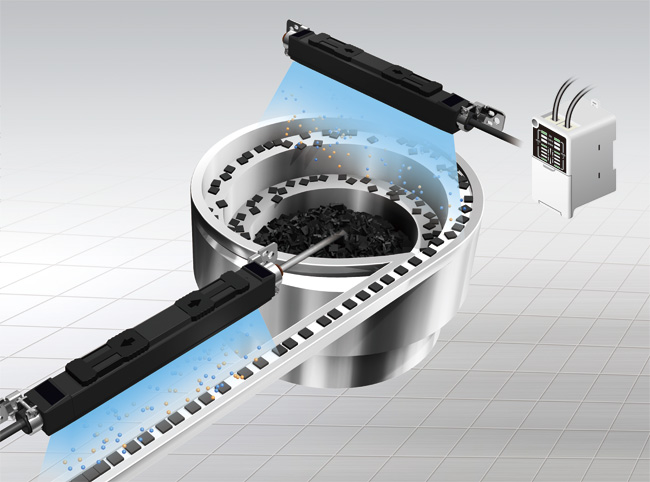 • Different heads can be combined.
• Charge removal is possible with a layout that places heads on either side of the workpiece.
• The charge removal efficiency can be increased by synchronizing the two heads. 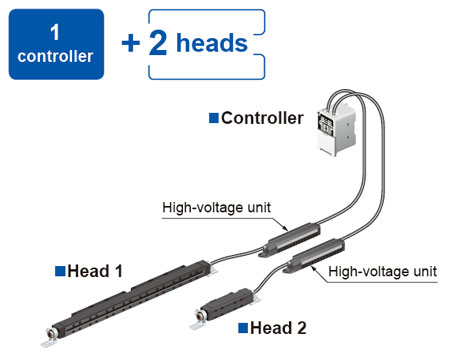 The pulse AC method enables the ER-X001 to generate and discharge a large amount of ions, which makes charge removal faster. Furthermore, as a spot type ionizer, it achieves the fastest charge removal of 0.3 sec. or less* (±1,000 V → ±100 V).
*Based on research conducted by our company as of October 2014.

The ER-X series heads are compact in size (30 × 22 mm 1.181 × 0.866 in) and installable even in a narrow space. The heads can be rotated 360 degrees to enable charge removal area adjustment after installation. 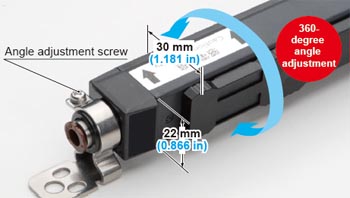 The ER-X series heads have a flat discharge face, allowing effortless cleaning of the discharge needles and air outlets by simply brushing along the groove provided. 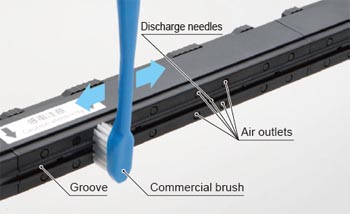 The removable discharge needle unit (including a set of four needles) substantially simplifies maintenance. To remove the unit, just slide it toward both ends as indicated by the arrows. 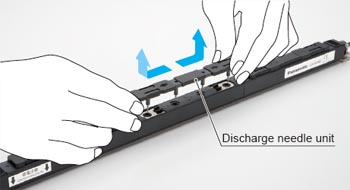 In consideration of the manufacturing process (secondary cells etc.), the ER-X series heads neither use copper nor plate processing. This minimizes the risk of contamination with foreign substances.

The ER-X series has adopted the pulse AC method that alternately applies positive and negative voltages to each discharge needle. This enables generation and discharge of a large amount of ions, resulting in faster charge removal. In addition, the method offers variable discharge frequency/ion balance (between the positive (+) and negative (-) widths) and is useful for charge removal on different types of workpieces.

Level meter for visual monitoring of the charge removal status

The ER-X series has two built-in monitoring modes. Ion Monitor mode detects and displays the amount of positive and negative ions being generated. The level meter can be used to visually identify degradation of ion production due to factors such as dust accumulation on the discharge needles. The Charge Monitor mode lets you quickly determine if the area around the head carries a positive or negative charge. These modes can be selected by using the display selector switch to determine how you would like to utilize the level meter. 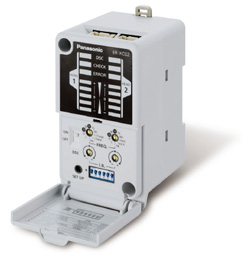 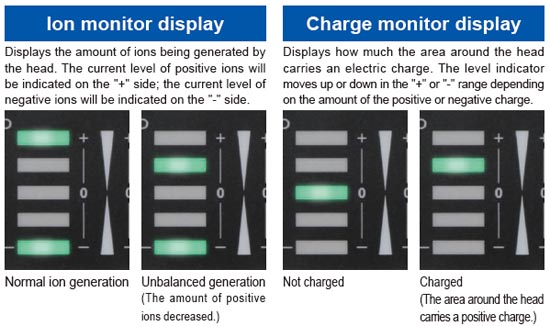 The ER-X series provides an automatic ion balance control mechanism that senses the amount of ions being generated (which changes according to environmental factors) and compensate for this deviation in the controller, thus maintaining a highly stable ion balance as an original operator setting.

Notes:
1) In condition of discharge distance 100 mm 3.937 in, center of the product, discharge wavelength 50 Hz and no air supply.
2) Ion balance is average of plus and minus. Also, the specification value is typical value in condition of less than ±10℃ ambient temperature change, set the ion balance after 30 minutes of the discharge starting, switching on the ion balance control function.
3) The dried clean air is dried (dew point: equivalent of -20℃) and filtered (mesh-size: equivalent of 0.01 μm) air.